race:
elven; more particularly, some variety of night elf.
age:
adult; appears around what would be 'mid to late 30s' for a human or orc.
gender:
uncertain... is he a kinda fem guy? is she a butch, flat-chested woman? or is this person somewhere in between these two, or even neither...? they seem just as likely to be any of these, or even none of them.
height:
short for their race, just under

.
build:
androgynous. sturdy; heavier of bone than expected for most elves.
physique:
athletic in appearance, the more subtle definition of their body hinting at a life of hard labor rather than the focused bodybuilding a life of leisure allows.
hair:
voluminous white, blue-white in shadow, with a curious kinked, wavy texture. kept short, only reaching the jawline at its longest in the back.
complexion:
dark blue-indigo, covered quite densely in tiny, even darker freckles.
eyes:
glowing silver-white, tinted blue. subtly heterochromatic, only noticeable when close: their left eye tinted just slightly more of an emerald green.
distinguishing characteristics:
a ragged, depigmented scar running down the middle of their chest, often partly visible from beneath their clothing. a similarly ugly and ragged pair of scars appear on their abdomen, lower left side from the front and lower right side from the back. various smaller and less notable scarring all over their body.
speech:
middling pitch that isn't easily gendered. tends to speak softly and somewhat slowly, as if choosing their words carefully. addresses others in fluent Darnassian; accented Taurahe, Common, and Thalassian; and rough, broken Orcish.

Strange for their race, though somewhat less so with the return of the Nightborne to the rest of the world. The elf's dark complexion was still eye-catching to some, though perhaps more so as one approached closely enough. Just as anomalous, they only stood about as tall as the average orc or human man, their husky build and scarred body all the more telling of a strenuous and even perilous life. Such scars were quite easily viewed, practically left on display by the elf's choice of wardrobe, donning a simple dark cloak around their otherwise bare torso, wrapped primarily around their face and shoulders. The most prominent and ugly of scars down the middle of their chest was only partially covered by this wrapping, pale and unpigmented with a ragged edge suggesting origin from an especially horrific wound. The second scar was a smaller but no more pleasing to lay eyes on, gouging the dark elf's stomach vertically along both the front and back, suggesting actual impalement...? The third, only caught in glimpses, a set of thin cuts beneath each pectoral muscle, their origin guessed by some but obvious to others.

Plain dark leather covered their legs to the knee, and simple sandals made up their footwear. A pale cord was worn around the waist, becoming a belt, the knot clasped with a steel sigil woven into a particular, intricate design. Around each leg at the thigh was tied and fastened a leather bag, one more general purpose, the other seeming more particularly narrow... perhaps a makeshift quiver. Were there any further pouches or bags of any kind fastened to the elf's person, they were unseen, likely hidden by the cloak which was allowed to trail down the entirety of their back.

"Their". Indeed. "they" was the most sensical descriptor for the elf's gender, or lack thereof, as visually their person was completely androgynous. Their stocky build offered no gendered features, chest flat, the wavy, nearly curling snow-white hair kept short. Even their voice, though soft and uncommonly heard, was deep enough to throw uncertainty to the perception of any eavesdroppers; the pants, loose enough from their form to hide any features. Most choosing to gaze upon the dark elf for any extended period seemed to decide for themselves whatever the elf may be, though chosen perception always tends to vary wildly.

When asked, or greeted in any friendly and polite manner, the elf is slow to meet another's gaze, almost seeming to shrink away from the presence of another person. Their soft reply, rolling with the accent of their mother tongue, always returned to reveal them thus: 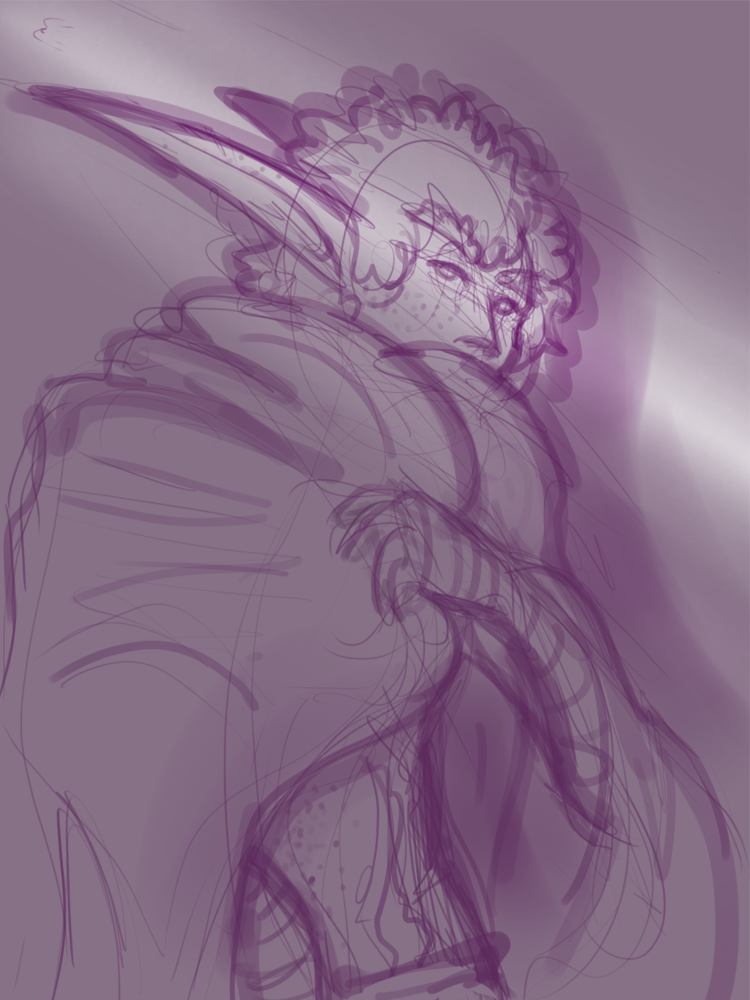 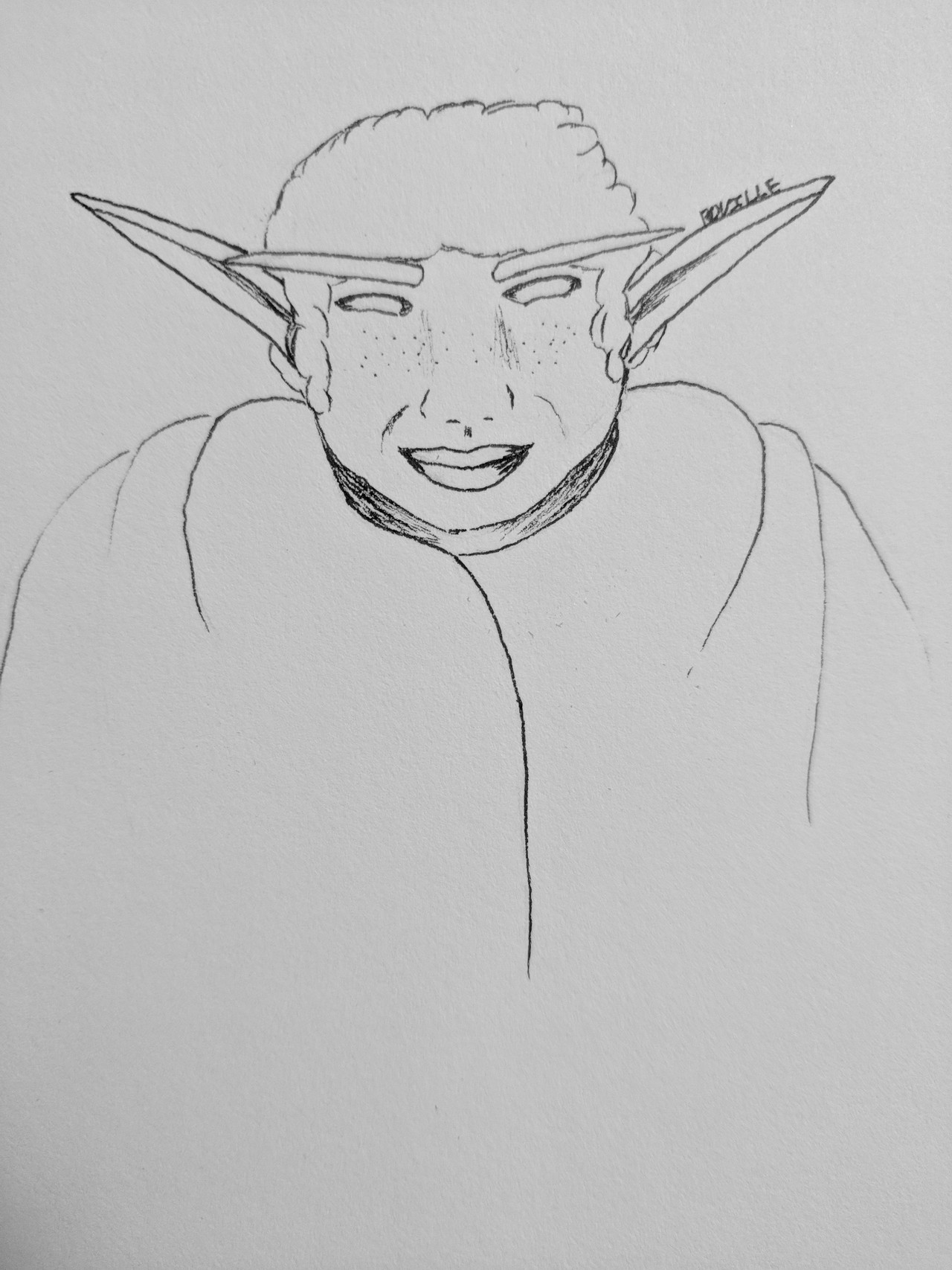 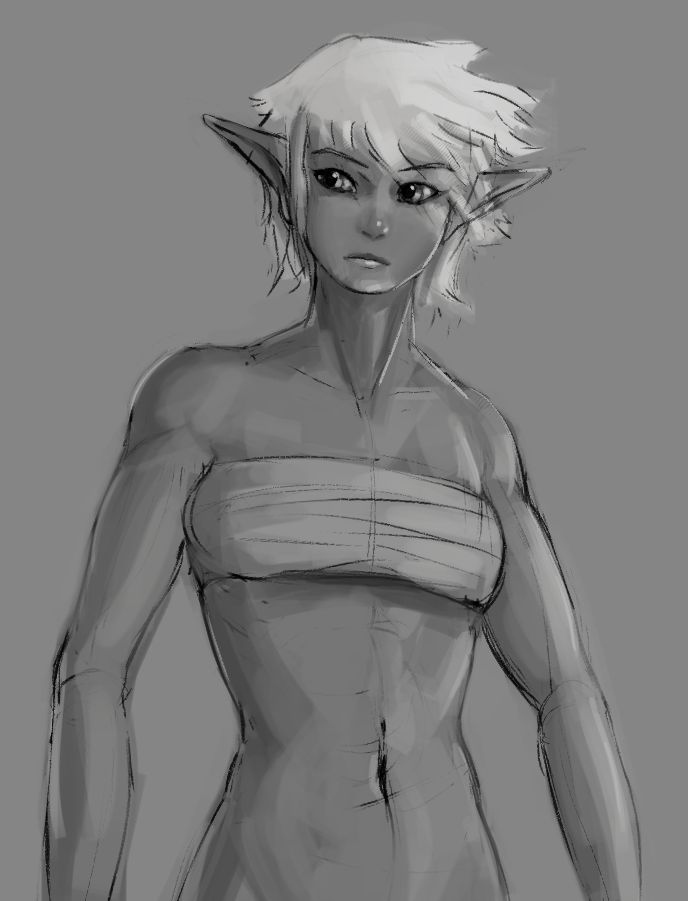